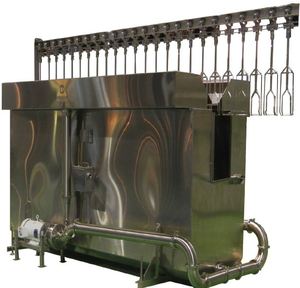 Ever look at the floor under the line coming from your final picker and see the sheen of oil on the water?

That’s yield, disappearing down the drain.

Prime Equipment Group’s new Dual Cascade Cooler reclaims that lost yield by immediately cooling the birds by up to 32 degrees–and adding up to 0.25 percent yield back to live weight in the process.

It works by immediately cooling and solidifying the fat that is emuslified by the heat and agitation of the scalding and picking process. Without the cooling power of the DCC-1, that yield simply disappears.

“At Prime, we focus on equipmnent that adds value for processors–machines and processses that offer quick payback based on the money they can save through labor efficiencies or increased yields,” says Prime Equipment President Joe Gasbarro. “The DCC-1 is a machine that can pay back quickly and make money for years.” 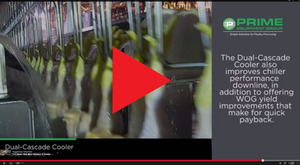 According to test data from production floors, the DCC-1 can drop bird temperatures up to 32 degrees and improve WOG yields by 0.1 to 0.25 percent. And since it can use chiller overflow water, the ongoing cost of usage is low.

“Processors know that 0.25 percent is a signficant amount,” Gasbarro says. “And that’s a big part of what makes this machine pay back quickly and keep on generating extra yield.”

Additionally, the DCC-1 adds another point to introduce anti-microbial intervention that is extremely early in the line, helping to reduce pre-chill bacteria counts. Since the anti-microbials hit the bird when the folicles are open, it adds additional protection in areas that are particularly difficult to reach by conventional means.

Features and benefits of the Dual-Cascade Cooler include:.

For  information on the DCC-1, and to get a custom ROI spreadsheet unique to your line, call (614) 253-8590, visit www.primeequipmentgroup.com or contact your Prime Equipment Group Regional Sales Manager today.